Gluten is the common name given to a protein found in wheat, barley rye and their derivatives. Gluten acts as a glue and gives breads and doughs their shape.

Gluten causes an autoimmune reaction in people with celiac disease. It is frequently found in unexpected foods, used as thickeners or even an anti-caking agent. 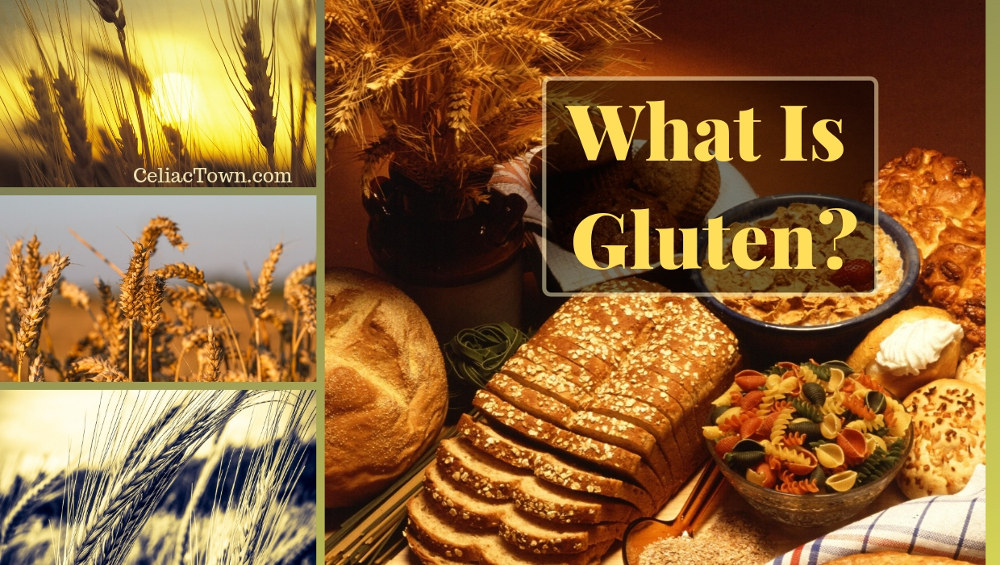 What Has Gluten In It

Many common foods contain gluten. Flours are frequently used in sauces and as thickeners, which makes ordinary soups toxic to celiacs.

→ Barley is used in malt, which is why milkshakes and other barley malt products can catch you by surprise.

Here are some common foods that contain gluten:

The foods listed below are an example of common foods that contain gluten. Many items like bread, pasta and cookies are obvious gluten foods to avoid, but there are other less obvious sources of gluten.

Soups, sauces, dressings and soy sauce are some sneaky foods that contain gluten. Candy and ice cream can be real problems for children with celiac disease.

The good news is that many of the foods below have gluten free options available. There are some great gluten free brands offering celiac safe snacks and dishes.

→ Some reliable brands are Enjoy Life, Udi’s and Glutino.

Unfortunately you won’t just find gluten listed as an ingredient on labels. Reading food labels and recipe ingredients can get really confusing.

A good place to start is by becoming familiar with which crops are gluten free grains and which are toxic gluten grains.

Wheat, barley and rye aren’t the only names of gluten grains that we celiacs have to avoid.

Crops are constantly being bred and changed so ingredients like gamut, spelt, farro, emmer and einkorn are actually all part of the wheat family.

Below are gluten free grains that are a great option to replace many of the gluten grains that we can’t eat.

These nine gluten free grains have become more available and easier to buy in the United States because of the popularity of the gluten free diet.

Like all grains it’s important to make sure you purchase crops that haven’t been cross contaminated with wheat, barley or rye.

Some farmers have become educated about the needs of celiac disease patients and are growing gluten free crops separately and then harvesting and processing them on separate equipment.

Amaranth is an ancient Aztec gluten free grain that has around 60 different species.

The plant can also be up to six feet tall with wide leaves and vibrant red flowers that are made up of small “grainy” buds.

Surprisingly buckwheat is one of the gluten free grains. It’s actually more of a fruit seed than a cereal grain, but many people think it’s a grain.

It can be turned into noodles, flour or even made into a kind of rice.

Buckwheat tea is a popular drink enjoyed for it’s health benefits. Kasha is the name for roasted buckwheat.

America is the largest producer of corn in the world and corn is the number one field crop in the U.S. Corn is also the most produced grain in the entire world.

Fresh corn is considered a vegetable, but dried corn is classified as a gluten free grain.

About a fifth of all human nutrition globally comes from corn sources so getting to keeping this staple in our diet is a huge win for many celiacs!

You have probably heard about millet because of bird feed if you live in the United States.

Millet is an ancient gluten free grain that’s been used for the last ten thousand years. It’s popular in Asia and Africa and millet grass crops have become more popular in the U.S. due to their gluten free properties and the ability to grow in drought conditions.

→ If you want a gluten free millet safe from cross contamination Golden Prairie Millet has listened to customers with celiac disease and taken every precaution for us.

Quinoa is actually related to spinach and the leaves can be eaten in addition to the quinoa grains. Currently, there are over 120 known varieties of quinoa but red, white and black are the most commonly sold.

It’s become a popular staple in gluten free foods with uses in pastas, salads, crackers and granolas. This gluten free grain is  a great tasting and nutritious addition to any diet.

Rice is the second most produced grain in the world and tends to be a big part of the celiac gluten free diet. There are many varieties of rice and they can be used as flours and as other substitutes for wheat in gluten free products.

Another reason rice tends to be a staple in the celiac diet is because most people are already familiar with this grain, know how to prepare rice, it’s easy to find and tastes good.

Like all gluten free grains, rice can be at risk for cross contamination when grown, harvested and processed. For this reason, always make sure to purchase rice that is labeled gluten free.

Sorghum is an ancient Egyptian grain collected over 8000 years ago in Egypt and brought to Africa. The crop has become more popular for human consumption in the U.S. because of the need for more gluten free food options.

There are many varieties sorghum, with crops that can grow from 2-15 feet tall.

Teff is an ancient Ethiopian fine grain that comes in various colors and is about the size of a poppy seed. The darker brown types of teff have more of an earthy taste, while the light and white colors have milder flavors.

Teff has become more popular and is now being grown inside the US in Idaho, California, Nevada and Texas. Give this gluten free grain a try if you want to add a little variety to your meal plan.

Last is The Controversial Oat!

Oats may be a gluten free grain, but they are rarely recommended as a staple in the gluten free diet. Read below to learn why oats are a risk for celiac patients.

So, Do Oats Contain Gluten?

Technically, oats do not contain gluten. The oat is a gluten free grain. However, in reality many oats have been found to be contaminated with gluten do to cross contamination.

Why are oats a gluten risk?

Oats are a gluten free grain but oats have gluten because they are usually grown near by or in rotation with barley, rye and wheat fields.

Frequently, the same equipment is used to store, harvest, and transport the oat, wheat, rye and barley crops. This makes it very likely that oats will be contaminated with other crops.

For this reason it’s recommended for celiacs to be very careful when consuming oats, even gluten free oats.

Another reason oats are controversial:

Studies are showing that a small percentage (about 8%) of celiacs have a celiac type reaction to uncontaminated, gluten free oats. So if you are experiencing symptoms of celiac whenever you eat oats, you could be part of the 8%.

The risk for celiacs from oats is a real danger. In fact, in New Zealand oat and oat products are not even allowed to be labeled as gluten free products.